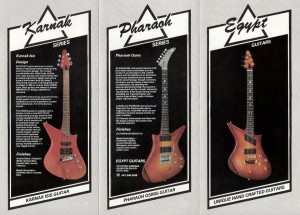 The range of models offered included the Isis and Osiris guitars and the Nefertiti bass. The Osiris guitar was a reverse body design based on the Isis shape. The Nefertiti was also available in a fretless version, punningly entitled Nofretiti! All models were available in 3 versions ; Karnak, Luxor and Pharaoh. Karnak was the base model with Pharaoh being the top of the range with the highest specification. 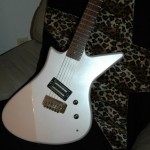 Raw timber was brought in, in rough sawn planks or wany edged boards and converted in the workshop. All the instruments were painted and finished at Leyden Gardens and shipped from there to the various customers. Karnak models were manufactured completely in mahogany or with an ash body and a maple neck. All models in this range were fitted with a bubinga fingerboard. 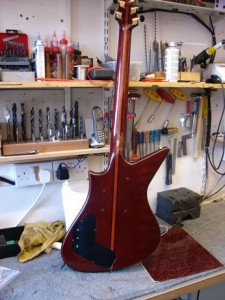 Luxor models had the option of matching maple or mahogany neck and body. The necks on the Luxor range were a multi laminate of maple or mahogany with a hornbeam central strip and 2 thinner contrasting strips of wenge. Hornbeam was used centrally mainly for it’s inert and stable properties. The wenge strips were chosen mainly for aesthetic reasons although the 5 laminate structure is very stable and resistant to warping.  This multi laminate detail was continued through the body giving the instruments the impression of being of “through neck” construction although necks on all models were fitted to the body by way of a tenon joint.

Pharaoh models had a similar construction to those in the Luxor range but had the addition of a bookmatched timber facing to the body with a contrasting black veneer “sandwich” detail.

This exact detail was also carried out on the headstock of the Pharaoh range. Facing materials used were rippled maple, rippled sycamore, rippled ash, birdseye maple, burr elm and zebrano among others. 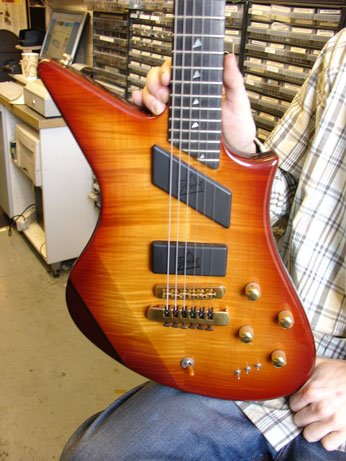 The Luxor and Pharaoh variants were fitted with custom manufactured Egypt Cleartone pickups made by Kent Armstrong. These pickups were cast in black resin and had the Egypt Guitars pyramid logo engraved on the top face matching the hand cut mother of pearl pyramid fingerboard inlays fitted to these ranges. Fingerboards on the Luxor and Pharaoh ranges were manufactured in ebony and were unbound. The pyramid inlays were engraved in the fingerboards with the help of an oversize template and a pantograph machine more commonly used by engravers. The inlays were handcut from mother of pearl blanks. inlays on the Karnak were principally dot inlays cut from aluminum rod. 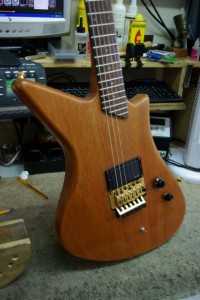 The Karnak range used Schaller Electronics humbucking and single coil pickups, mainly Hot Stuff pickups though a few Golden 50 and S6 pickups were used. All Pharaoh instruments were fitted with a sophisticated active electronic system named Creative EQ. This was a powerful 2 band parametric 16db cut and boost tone control system fitted with custom detented pots. This system was also designed and made in house. The hardware fitted to all instruments was sourced from Schaller in what was then West Germany. Apart from the hardware and pickup systems, all aspects of the instruments were manufactured in house…even the truss rods! 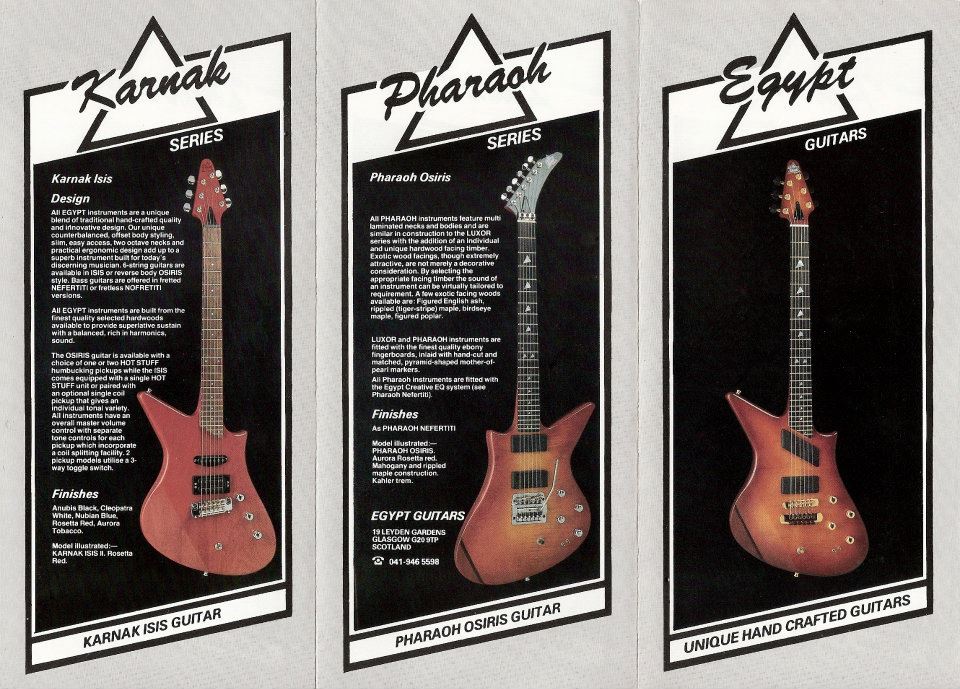 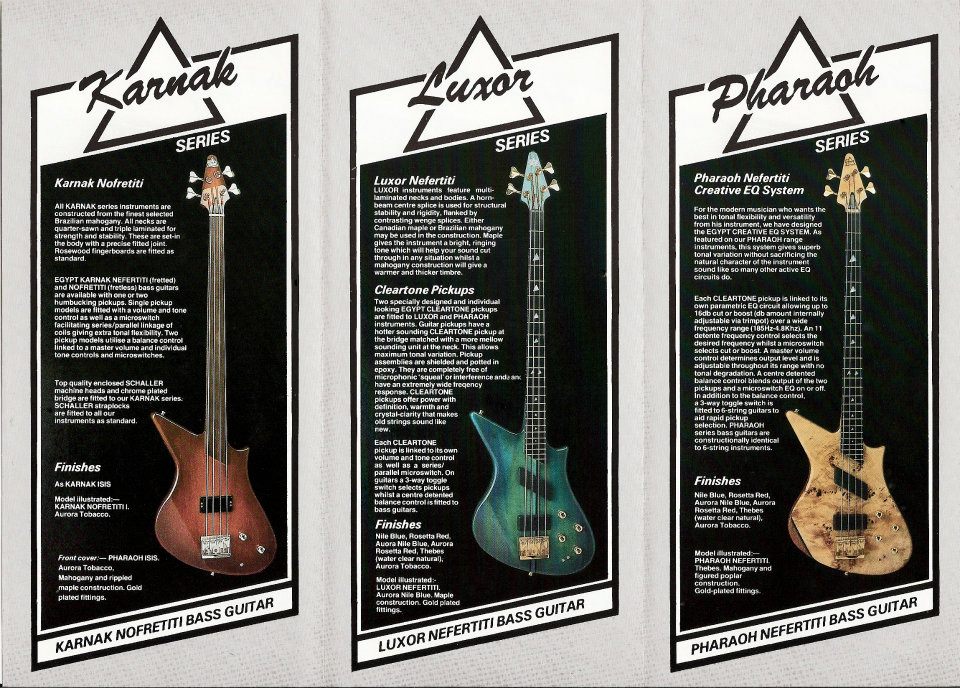